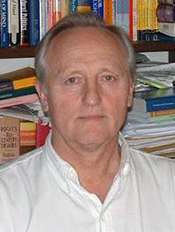 Zoltán Kövecses received his M.A. from Eötvös Loránd University, Budapest, in 1972 and his Ph.D. and D.Sc. from the Hungarian Academy of Sciences in 1988 and 1996, respectively. He is Professor of Linguistics in the Department of American Studies at Eötvös Loránd University, Budapest. In 1982-83, he worked on his Ph.D. in the Linguistics Department of the University of California at Berkeley.

He is one of the four editors of the international scholarly journal, Metaphor and Symbol, published by Lawrence Erlbaum Publishers in the U.S. He also serves on the advisory board of Cognitive Linguistics and several other international professional journals. He has lectured widely as an invited plenary speaker at various international conferences. He has received several scholarships from the Fulbright Foundation, the American Council of Learned Societies, and the Hungarian Academy of Sciences.

He is currently working on the language and conceptualization of emotions, cross-cultural variation in metaphor, and the issue of the relationship between language, mind, and culture from a cognitive linguistic perspective.

For a full list of publications, complete with journal articles and book chapters see the SEAS bibliographic database or www.mtmt.hu.