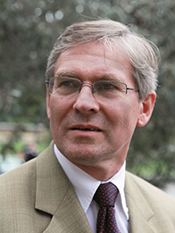 After graduating from high school and doing military service, Tamás Magyarics got admitted into Kossuth Lajos University, Debrecen as an English and History major. He continued his studies at Eötvös Loránd University, Budapest after completing two years in Debrecen and he graduated in 1981 as a teacher of English and History. He taught at a high school for years, then was employed briefly at the Foreign Languages Department at ELTE. Between November 1984 and May 1986 he taught Hungarian in the United States and, at the same time, attended the Graduate School at the Department of History at Louisiana State University, Baton Rouge. After returning to Hungary, he was again a high school teacher for a year, while he was also a part-time lecturer at the Department of English Studies at ELTE.

Tamás Magyarics was employed by ELTE as a full-time Assistant Professor in August 1987 and since then he has been first an Assistant Professor, then an Associate Professor at the School of English and American Studies. Currently, he is the Vice Chair of the Department of American Studies; in the past few years, he was twice acting Chair of the Department for various periods of time. He earned a University Doctorate in 1987 at ELTE and a Candidate’s Degree (Ph.D.) in 1997 at the Academy of Sciences, Budapest. He delivered his habilitation lectures in 2006.

Besides teaching at ELTE, he has had various teaching positions and assignments. Currently, he teaches at IES, Vienna; at CIEE, Budapest; and also at the Department of Foreign Relations at Corvinus University. In the past few years he taught at UCSB (1991) and Kodolányi János College (1993-2001).

Apart from his teaching positions, he has had other jobs as well. He was the Secretary General of the Hungarian Atlantic Council (2001-2002); and since 2002, he has been a Senior Research Fellow at the Hungarian Institute of International Relations (formerly the Center for Foreign Policy Studies, Teleki László Institute) Budapest. He is also the Editor-in-Chief of the Külügyi Szemle and its English language version, the Foreign Policy Review.

His major fields of research include the history of the US-Central European relations in the 20th century, with special reference to the Cold War years; the history of the U.S., with an emphasis on foreign affairs; the transatlantic relations; and the theory of international relations. He has done research in a number of archives and libraries, including the Library of Congress, the National Archives, and the Presidential Libraries of Presidents Harry S. Truman, Dwight D. Eisenhower, John F. Kennedy, and Lyndon B. Johnson besides, of course, the relevant Hungarian research institutions. For research in these and other institutions he has received several grants; among other ones a Fulbright-grant, a Soros-grant, a USIS-grant, etc.

20th Century U.S. History
The U.S. foreign policy in a constitutional framework
The impact of the Cold War on U.S. society
The War in Vietnam and its international implications

Ideology
Main currents in American political thought: liberalism versus conservatism
The rise of conservatism in the latter half of the 20th century
The (neo)conservative foreign policy

Transatlantic Relations
The burdensharing debate
The “special relationship” between the U.S. and the U.K.
The transatlantic security cooperation

For a full list of publications, complete with journal articles and book chapters see the SEAS bibliographic database or www.mtmt.hu.