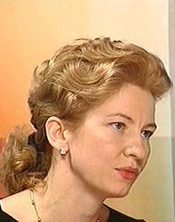 Éva Eszter Szabó, PhD, Assistant Professor of the Department of American Studies at Eötvös Loránd University (ELTE) since 2007. A graduate of ELTE with an MA in Spanish Philology and Teaching Spanish as a Second Language (1994) and an MA with special honors in American Studies and Teaching English as a Second Language (1995). She received her PhD in History also from ELTE in 2003. Between 2004 and 2007 she was a Postdoctoral Research Fellow at the Department of American Studies of SEAS, and from 2004 to 2008, she also worked as an Associate Professor at the English Department of Berzsenyi Dániel College in Szombathely.

She has given lectures and seminars on US history, US cultural geography, US immigration history, US–Latin America relations, US-Central Europe relations, global migration, and border security issues. She is an instructor in two doctoral schools at ELTE: the American Studies Program of the Doctoral School of Literary Studies, and the Modern and Contemporary World History Doctoral Program, Doctoral School of History, Institute of Historical Studies. Dr. Szabó has done extensive research in the United States and various field trips in Latin American countries, such as Mexico, Cuba and the Dominican Republic. In 2005, she received a Hungarian–American Enterprise Scholarship Fund fellowship as a Senior Scholar and carried out research activities at the Eisenhower Library in Abilene, Kansas, the National Archives and the Library of Congress in Washington, DC. In 2018, she was awarded the residential research fellowship of the International Forum for U.S. Studies, at the University of Illnois. Her first book entitled U.S. Foreign and Immigration Policies in the Caribben Basin was published by Savaria University Press in 2007. In addition, her publications include essays, articles, chapters, and reviews in Review of International American Studies, Americana, Hungarian Review, Magyar Szemle, Századok, Külügyi Szemle, Rubicon, Kommentár, Kül-Világ, and Acta Anglistica Savariensia. Dr. Szabó is a member of HAAS, HUSSE, SHAFR, IASA and LASA.

Correlation of U.S. Foreign and Immigration Policies
Global Migration in Global Politics
The History of Western Hemisphere Immigration
The Strategic Value of Refugee Programs in the Cold War
Defectors, Escapees, and Refugees: The Use of Migration in Psychological Warfare

Minorities in the U.S.
U.S. Latinos and the Remaking of “America”
Native American History and the Ethnic Revival

For a full list of publications, complete with journal articles and book chapters see www.mtmt.hu.